More showers across Bangladesh in 24hrs 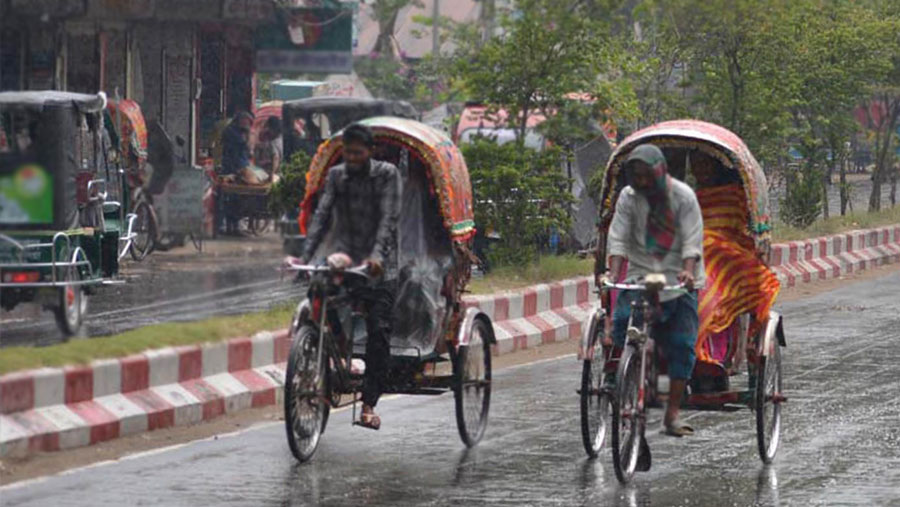 More rains are likely to drench Bangladesh in the next 24 hours, said the Met Office in its latest forecast.

Light to moderate rain/thunder showers accompanied by temporary gusty/squally wind and lightning flashes is likely to occur at most places over Dhaka, Khulna, Barishal, Rajshahi and Chattogram divisions and at many places over Rangpur, Mymensingh and Sylhet divisions with moderately heavy to very heavy falls at places over the country, the weather forecast reads.

However, rainfall activity may decrease in the next two days.

Day temperature may remain nearly unchanged over the country, it added.

The weather office recorded the highest 143mm rainfall in Khepupara of Patuakhali district in 24 hours till 6 p.m. on Monday (Sep 12).

Meanwhile, Dhaka recorded 31mm of rainfall during this period.

Meanwhile, the land depression over South Madhya Pradesh and the adjoining areas of India moved west northwestwards further and weakened into a well-marked low over the same area.

Under its influence, deep convection is taking place over North Bay and adjoining areas.

The axis of the monsoon trough runs through Rajasthan, the centre of the well-marked low, Odisha, Bihar, Gangetic West Bengal to Assam across the central part of Bangladesh, added the Met Office bulletin.

One of its associated troughs extends up to North Bay. Monsoon is active over Bangladesh and strong over North Bay.