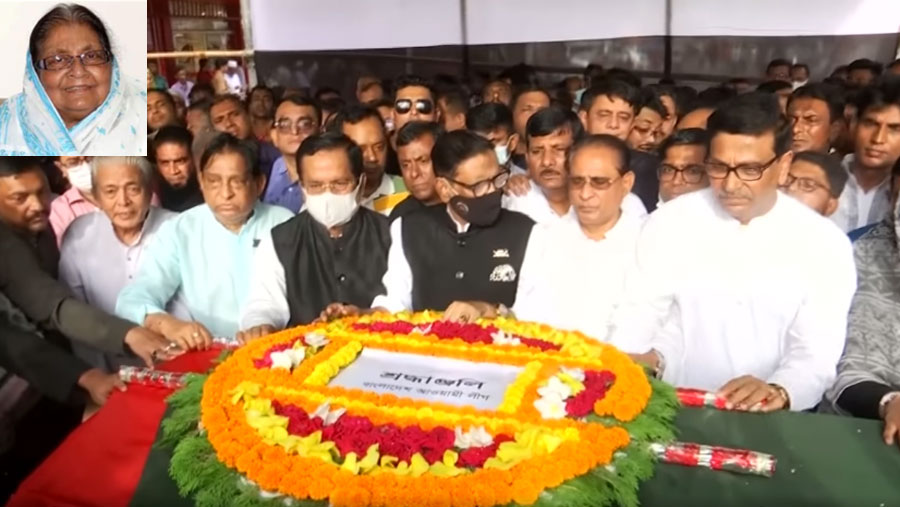 Octogenarian politician and Jatiyo Sangsad Deputy Leader Syeda Sajeda Chowdhury, who died at a city hospital on Sunday night at the age of 87, was laid to eternal rest at Banani Graveyard in Dhaka on Monday (Sep 12) with state honor, local media reported.

On behalf of Dhaka district administration, a contingent of police gave a guard of honor to valiant freedom fighter and veteran politician Sajeda Chowdhury, also Bangladesh Awami League Presidium Member, recalling her role in 1971 Liberation War before her burial at 6.15 p.m. at the graveyard.

Awami League General Secretary and Road Transport and Bridges Minister Obaidul Quader along with the party's central leaders and Dhaka city north mayor Atiqul Islam were present on the occasion.

Earlier, her second Namaj-e-Janaza was held at south gate of Baitul Mukarram National Mosque after Asr prayers. People of all strata of life joined the Janaza.

To allow the people to pay their last tributes to the veteran politician, her body was kept at the Central Shaheed Minar in Dhaka at 3 p.m. On behalf of the President Md. Abdul Hamid and the Prime Minister Sheikh Hasina, tributes were paid to her by placing wreaths on her coffin. Later, Parliament Speaker Dr Shirin Sharmin Chaudhury and Deputy Speaker Shamsul Haque Tuku laid wreaths on her coffin.

Earlier, her body was taken to her constituency Faridpur-2 from where she was elected parliament member for several times.

Her body was taken to Awami League's Bangabandhu Avenue Central Office in the capital at 4.18 p.m. to allow the party leaders and workers to have last glimpse of her. Awami League general secretary and other central leaders were present. They laid tributes to her. Leaders of different associate bodies also paid tribute to her.

Sajeda Chowdhury was admitted to Combined Military Hospital (CMH) after her health condition became critical last week, where she breathed her last around 11:40 p.m. Sunday.

Syeda Sajeda Chowdhury was born on May 8 in 1935. The veteran politician joined the politics of Awami League in 1956. After the assassination of Bangabandhu Sheikh Mujibur Rahman and most of his family members on Aug 15 in 1975, she played an important role in keeping the Awami League organized at a critical moment.