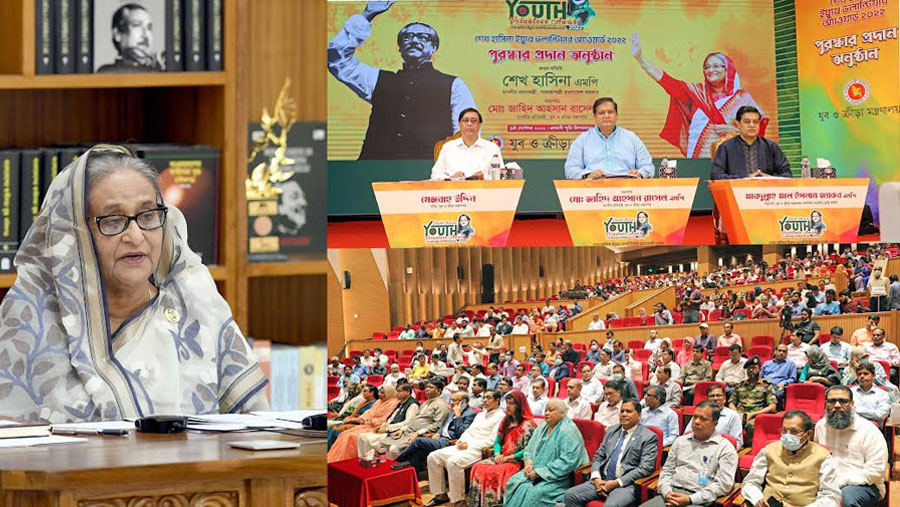 Prime Minister Sheikh Hasina on Sunday (Sep 11) called youths most important stakeholders to transform Bangladesh into a developed and prosperous country by 2041, asking them to be well prepared for every arena including education.

"The youths are most important for a nation. I want they to get ready properly particularly in education – Our youth is our strength and they can turn Bangladesh into a developed and prosperous country as envisioned by Bangabandhu," she said.

The PM said this while distributing "Sheikh Hasina Youth Volunteer Award-2022", for the second time, organised by the Ministry of Youth and Sports, at the Osmani Memorial Auditorium in Dhaka, joining virtually from her official Ganabhaban residence, local media reported.

Sheikh Hasina said Bangladesh is now becoming a developing country and the government has taken programmes to transform Bangladesh into a developed one by 2041.

She also said, "We have got the status of a developing nation. Our next target is to become a developed country by 2041 and the youths can fulfill the target as they are the main architects of 2041."

Sheikh Hasina greeted the award winning youths for their contribution to creating employment, imparting training to others and reaching education to the grassroots alongside doing various social and nation building activities.

"Today, I am very happy to see that the youth folk have stood beside the people and provided education and training alongside creating employment for the masses," she said.

The PM also expressed her hope that the next generation will be inspired through their activities and will engage themselves in national building works.

She, as well, recalled with gratitude that the youth in large number had come forward to help the masses during the peak time of the Covid-19 pandemic when even the close relatives left their near ones' bodies in fear of being infected with the virus.

Referring to a remark of Bangabandhu that the youths are Bangladesh's main asset and they would build the country, she said her government has taken measures to give the young generation proper education particularly on science and technology to fit them for the fourth industrial revolution.

In this connection, she said Father of the Nation Bangabandhu Sheikh Mujibur Rahman had taken various measures for the overall development of the youths in the country's first five-year plan.

Following the footsteps of Bangabandhu, the premier said her government has taken every possible measure that included arrangement of proper education and employment for the development of the youths.

She said her government has given everything including banks, insurance, televisions and radios to the private sectors aimed at generating huge employment for the youths.

She said her government has even established Probashi Kallayan Bank so the youths can go abroad for jobs taking loans from the bank and thus they can save their ancestral properties and belongings.

The premier said youths are also being given loans from Karmasangsthan Bank without any guarantee as they can be entrepreneurs and generate employment for others.

"Be entrepreneurs, stop running after the jobs and generate employment for others," she said.

The PM said youths are being given loans through various government schemes alongside the banking channels as they can stand on their own foot and thus give the country a strong footing economically.

She said her government has established data centres up to union levels and community clinics where employment for a huge number of youths has been created.

Sheikh Hasina said her government has also given the homeless and landless people house free of cost as a part of their move to bring all the people under the housing scheme which is also creating employment.

The premier said they also established Palli Sanchoy Bank from where the beneficiaries of the "My House, My Firm" can get loans and become entrepreneurs.

State Minister for the Youth and Sports Md. Zahid Ahsan Russel spoke on the occasion while Chairman of the ministry's Parliamentary Affairs Standing Committee Abdullah Al Islam Jakob was present on the dais.

Secretary of the Ministry of Youth and Sports Mesbah Uddin gave the address of welcome.

On behalf of the PM, the state minister for youth and sports handed over a crest, certificate and a cheque of Tk one lakh each among the awardees.

Two of the awardees – Md Masud Alam and Meghna Khatun – expressed their feelings on behalf of the award recipients.

A video documentary on Sheikh Hasina's humanitarian works was screened at the function.