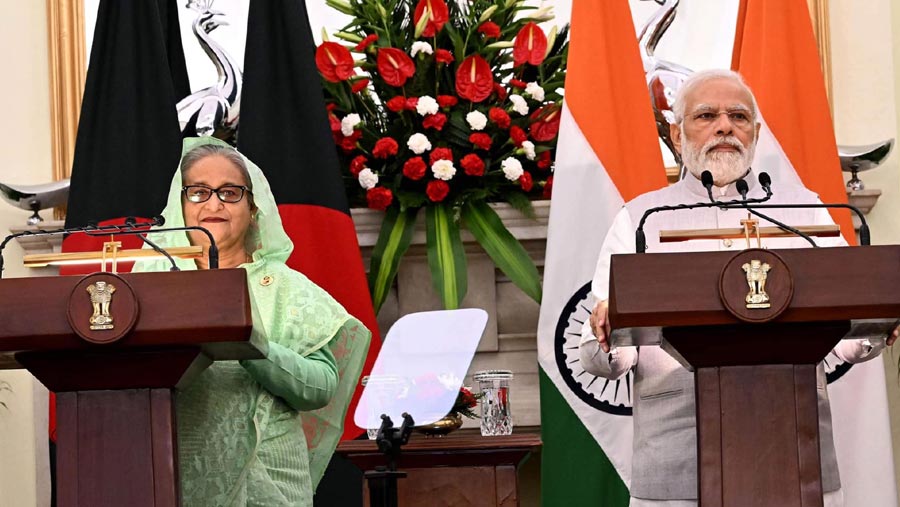 Prime Minister Sheikh Hasina on Tuesday (Sep 6) called bilateral relations between Bangladesh-India role model for neighborhood diplomacy, hoping all the outstanding issues, including Teesta Water Sharing Treaty will be signed  soon likewise many issues solved in the spirit of friendship and cooperation.

"I reiterated that India is the most important and closest neighbor of Bangladesh. Bangladesh-India bilateral relations are known to be Role Model for Neighborhood Diplomacy," she said.

The PM said in a joint statement  issued after holding bilateral talks between Bangladesh premier and her Indian counterpart Narendra Modi and witnessing exchange of seven MoUs signed between the concerned authorities of the two countries at the Hyderabad House in New Delhi, National News Agency of Bangladesh reported.

Sheikh Hasina noted that over the last decade, both the countries have achieved remarkable progress in number of areas.

"The two countries had resolved many outstanding issues in the spirit of friendship and cooperation and we expressed hope for all outstanding issues, including  signing of the Teesta Water Sharing Treaty at an early date," she added.

Referring to the signing MoU on Kushiara River between the two countries, the Premier said all the issues like the water sharing of 54 common rivers that included the Teesta water sharing treaty will also be resolved.

The PM said she and her Indian counterpart Narendra Modi concluded another round of fruitful discussion and its outcome will bring benefits to the peoples of both the countries.

"We held the meeting in a spirit of close friendship and cooperation. We discussed a wide range of bilateral issues to take forward our relationship in the days ahead," she said.

She also said during the talks they stressed the need for focusing on possible ways to materialize commitments and accommodate each other's priorities in a mutually beneficial manner.

"Connectivity, trade and commerce, investment, water resources management, security, border and lines of credit are some of the issues   we have discussed," she said.

She mentioned that having forged a strong partnership over the last 50 years, both countries are working on an increasingly wide range of issues of mutual interest.

"I and Prime Minister Modi agreed to pursue collaborative efforts to sustain our economic growth and maintain peace, security and stability in our two countries and in the region," Sheikh Hasina said.

If Bangladesh and India can work together as partners, Sheikh Hasina said it will bring benefit not only to the countries, it would also bring peace and prosperity in the region as a whole.

The PM said that bounded by 54 common rivers and four thousand kilometers of border, Bangladesh and India are committed to enhancing the collective welfare of the two peoples.

In his statement , Indian Prime Minister Narendra Modi  lauded Bangladesh’s economic growth and  hoped that Bangladesh and India will work closely in the coming days for the benefit of the two nations .

“Bangladesh has achieved remarkable development under the leadership of Prime Minister Sheikh Hasina. The two countries will work together for the benefit of the people of the two close neighbors,” he said.

Modi said as the biggest trade and development partner, India would work for further strengthening relationships between the two countries.

The Indian PM said that during the official talks, he had extensive discussions with Bangladesh premier Sheikh Hasina on different bilateral, regional and multilateral issues ranging from water resources management and connectivity to security.

“Today, Prime Minister Sheikh Hasina and I had a lot of discussions in all bilateral fields and on various issues," he added.

He said discussion was also held on flood mitigation initiative in South Assam of India and Bangladesh’s Sylhet region.

About the visit, he said Prime Minister Sheikh Hasina’s India visit is taking place amidst  independence festivals of the two countries, which he, said a very significant.

Describing Bangladesh as a very trusted friend of India, Modi said, “I have full faith that in the next 25 years, the friendship between India and Bangladesh will reach a new height”.

He said in the last few years, our mutual cooperation has grown very rapidly in every field. During the period, he said people-to-people relations between our two countries are improving steadily.

Today, in the later part of the day, she said she is expecting to call on the President of India and its Vice-President.

After that she said she will award 'Mujib Scholarships' to the direct descendants of the soldiers/officers of defence forces of India who were martyred or critically wounded during the great Liberation War of Bangladesh in 1971.

She expressed her gratitude for the invaluable support extended by the government and the people of India in Bangladesh's Liberation War.

"Since then, Bangladesh-India ties are anchored in shared history and culture, mutual trust and respect, longstanding friendship and continued cooperation," she said.

The PM appreciated Narendra Modi's visionary leadership that continues to provide added momentum to bilateral relations between the neighboring countries.

She also congratulated the government of India and its people on successful completion of the 'Azadi Ka Amrit Mahotsav' – the year-long celebrations marking the 75th year of India's Independence.

At the new dawn of the 'Amrit Kaal' for next 25 years, she said she extended her best wishes as India moves forward towards attaining resolutions made for 'Aatmanirbhar (self-reliant) Bharat'.