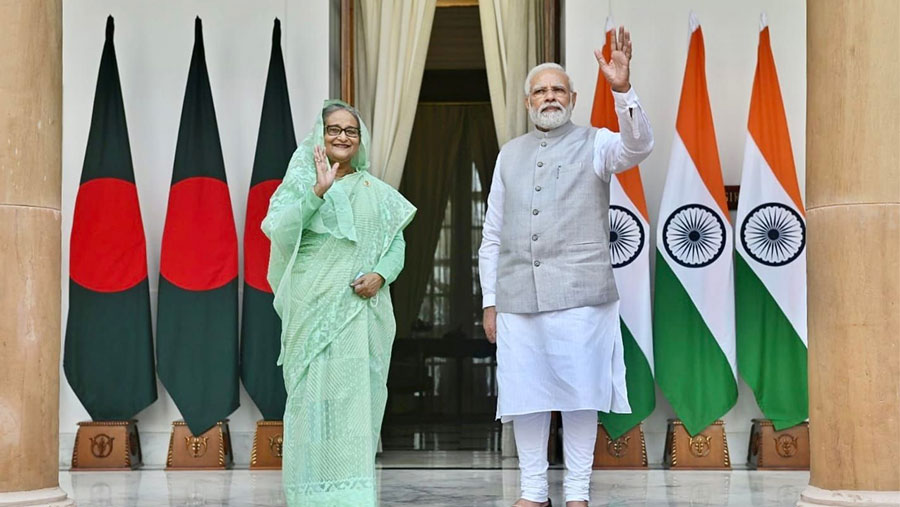 The MoUs were exchanged between Bangladesh and India in presence of the two premiers of both the countries.

Prior to signing of the MoUs, a bilateral talks between Bangladesh Prime Minister and her Indian counterpart held at the Hyderabad House in New Delhi.

Against the backdrop of the global economic downturn and ongoing Covid-19 pandemic and Russia-Ukraine war, the visit is considered very important as the two South Asian neighbors also discussed enhanced cooperation to overcome the crisis.

Prior to holding the bilateral talks, the two premiers had a tête-à-tête.

Earlier, at her arrival at the Hyderabad House, Narendra Modi received Sheikh Hasina and accorded her a ceremonial reception.

The Bangladesh premier also inspected the guard of honour there. National anthems of the two countries were played.

After the bilateral talks, a joint statement will be issued.

Sheikh Hasina is likely to attend a luncheon to be hosted by Narendra Modi at the Hyderabad House in honour of her.

The PM started the second day of her four-day state tour to India by visiting the Rashtrapati Bhavan in the morning where she was received by Narendra Modi with a ceremonial reception.

After visiting the Rashtrapati Bhaban, the PM went to Samadhi of Mahatma Gandhi at Raj Ghat to pay rich tribute to the great Indian leader.

Sheikh Hasina is expected to have separate courtesy calls on Indian President Droupadi Murmu and Vice President Jagdeep Dhankhar in the afternoon.

On her first day of India visit, Indian External Affairs Minister Dr S. Jaishankar paid a call on the Bangladesh Premier at the summit room of her Place of Residence, ITC Maurya Hotel.

After the call-on, she visited the Nizamuddin Aulia's Dargah and offered Nafal prayer and Fateha there and Munajat seeking blessings from the Almighty Allah for prosperity and welfare of the people and the nation and for the entire Muslim Ummah.