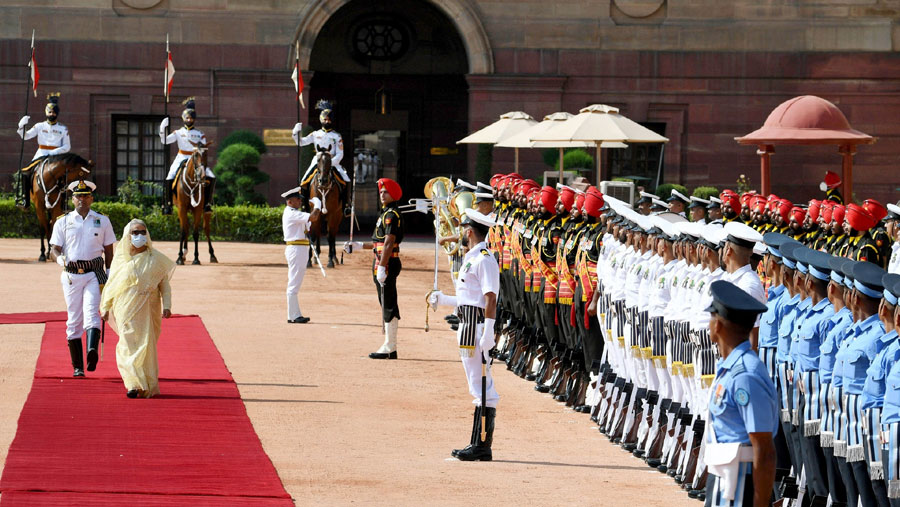 The Bangladesh premier was later given a guard of honour by a smartly turned out contingent drawn from three services of the Indian Armed Forces. The national anthems of the two countries were played at that time. Sheikh Hasina then inspected the guard and took salute. Then, the Indian PM introduced his cabinet colleagues to Sheikh Hasina at the presentation line. The Bangladesh PM also introduced her entourage members to Narendra Modi.

During the reception, the PM said India is our neighbouring country and close friend to us.

The premier expressed her gratitude to India, saying, "We are very much grateful to India for their help during our Liberation War in 1971”.

In this connection, she said Bangladesh gets assistance from India whenever required.

The premier said Bangladesh always believes its foreign policy “Friendship to all, malice to none”, formulated by Father of the Nation Bangabandhu Sheikh Mujibur Rahman.

Earlier, the Bangladesh premier arrived in the Palam Airport in New Delhi around 11:40 a.m. local time on Monday (Sep 5) on a four-day official visit. India rolled out the red carpet to welcome Sheikh Hasina.