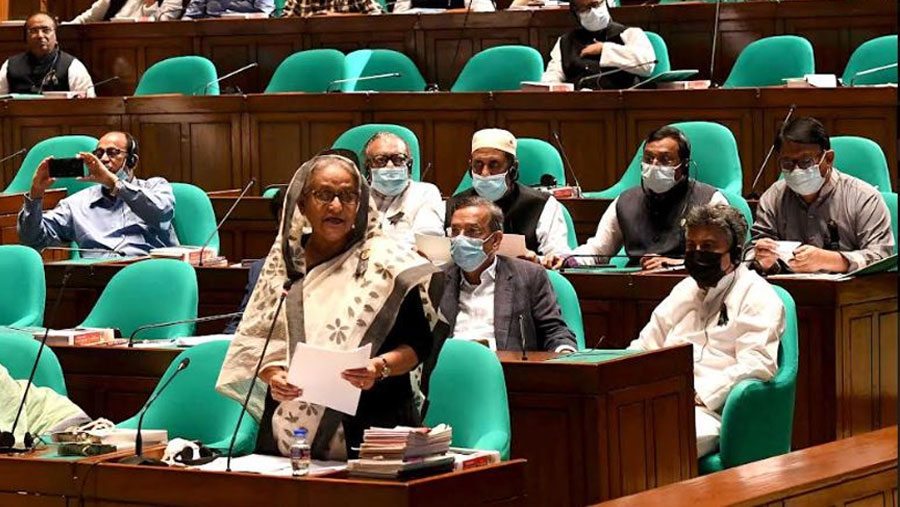 Prime Minister Sheikh Hasina on Tuesday (Aug 30) told the parliament that the government has been taking necessary measures whatever required to reduce people's sufferings in this adverse situation prevailing across the globe.

"We will do whatever is required to reduce people's sufferings and the Awami League government is truly doing that," she said.

The premier said these while participating in a general discussion on a proposal brought by opposition Jatiyo Party lawmaker Mujibul Haque Chunnu, local media reported.

Chunnu placed the proposal titled "Parliament's opinion is that short and long term sustainable measures taken by the government to deal with the problems of Covid-19, global unrest, Ukraine-Russia war, climate change, natural disasters, energy crisis, rising commodity prices should be informed to the nation through discussion in parliament."

The leader of the house briefly described the government's initiatives to tackle the situation due to the year-long Covid-19 pandemic and Russia-Ukraine war. She said the government is taking these steps so the country doesn't plunge into food scarcity.

Sheikh Hasina also reiterated her call to utilize every inch of the land to produce food products.

In this regard, she said the amount of import expenditure has been raised by an additional US$ nine billion due to price hike of the import items.

"We're regularly analyzing the situation extensively," she said, adding that "the government is not relying on the analysis of the researchers, rather we are analyzing by ourselves and considering the situation of the people and taking steps as per that direction."

The PM said that they will expand incentives for the export oriented items to boost export alongside diversification of it.

She, however, regretted that a section of people are always there who want to make extra profits during the hard times.

Sheikh Hasina noted that the whole world has fallen into trouble due to the Russia-Ukraine war, sanctions and counter sanctions.

In this regard, she mentioned that developed countries have already started austerity to reduce the consumption of energy and other essential commodities.

"People's welfare is the biggest issue to us, if people are in pain it gives me pain too," she added.

Seeking cooperation from all, the head of the government also urged all to refrain from confusing people through disseminating misleading information.

Earlier, lawmakers from opposition Jatiya Party and BNP in parliament blasted the government for the price hike of essentials, increasing price of gasoline products and governance related issues.

Treasury bench lawmakers, however, said the current situation of the country, particularly price hike of essentials, was caused due to global crisis following the Russia-Ukraine war.