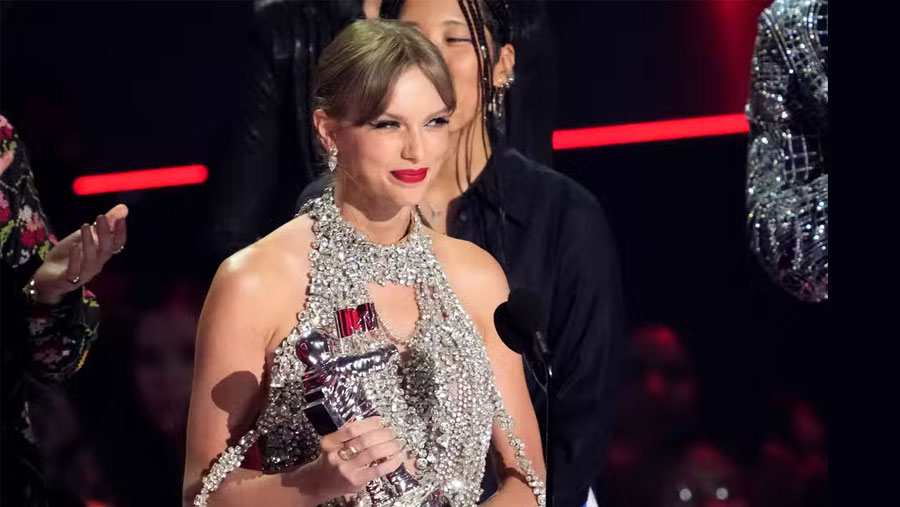 Taylor Swift announced a new album as she scooped the top prize at the MTV Video Music Awards (VMAs) on Sunday (Aug 28). The singer won several prizes at the event including the coveted best video, for All Too Well (10-Minute Version).

Swift said she was so honoured to win the prize, and took the opportunity to tell fans her next album Midnights would be released on Oct 21.

Other winners included Billie Eilish, Lizzo and Harry Styles, while Johnny Depp made a pre-recorded appearance.

This year’s VMAs took place less than an hour away at the Prudential Centre in Newark, New Jersey.

Swift made her bombshell announcement in the final moments of the show, which was hosted by Nicki Minaj, Jack Harlow and LL Cool J.

The video for All Too Well (10 Minute Version) (Taylor’s Version) features Stranger Things star Sadie Sink and Teen Wolf star Dylan O’Brien, and went viral earlier this year after fans speculated the song was based on Swift’s break-up with actor Jake Gyllenhaal.

In her speech for best longform video Swift thanked Sink and O’Brien, adding that the production team had “put their entire hearts” into the video.

The show was opened with a surprise performance from music superstar Fergie, who sang her hit song Glamourous and First Class with Jack Harlow.

Minaj, who received the video vanguard award, performed an explosive medley of her songs as she made her entrance.

The US rapper said she had “never ever written a speech in her life”, but went offstage to retrieve her phone to read her notes as she accepted the award from members of her fan club, the Barbz.

Later, the Red Hot Chili Peppers were presented with the global icon by US comedy-stoner duo Cheech and Chong.

The band’s bassist Flea dedicated the band’s award to the late drummer of the Foo Fighters, Taylor Hawkins.

“There’s another musical legend and his name is Taylor Hawkins… I miss him every day,” he told the audience.

The band also went on to win the best rock award, with lead singer Anthony Kiedis and Flea engaging in a “thank-off” to members of their entourage.

Further performances were given by rap legends Eminem and Snoop Dogg who gave a trippy “metaverse” rendition of their collaborative track From The D 2 The LBC.