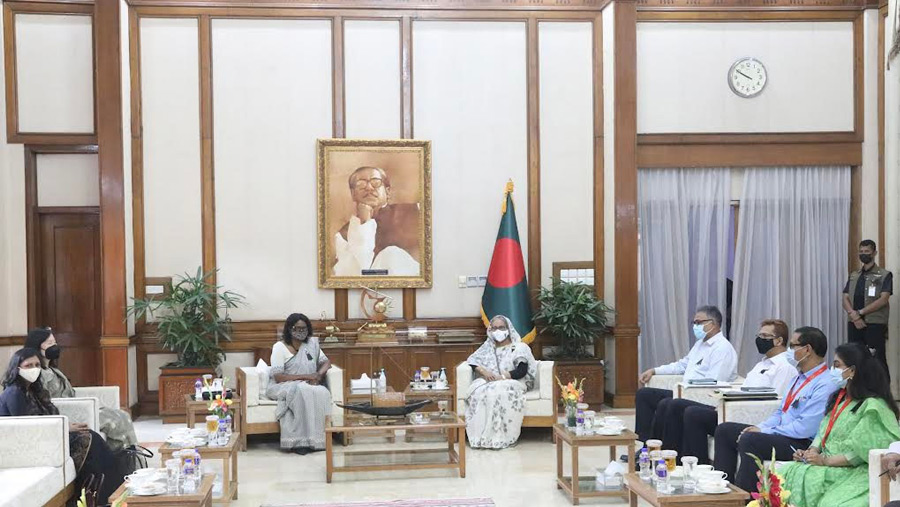 The World Bank country director said she has visited several places across Bangladesh and was overwhelmed seeing the development of its grassroots level.

Citing the example of a village in Cumilla, Tembon said she is pleased to see the small houses where each family is cultivating vegetables with tree plantation on their home’s premises.

She also applauded the PM for her Ashrayan Project. In this context, the premier said both husband and wife are the owner of the house being given under the project, and they are utilizing the land in their house premises for growing vegetables.

Tembon said she was very much pleased to see that students and other people involved themselves in harvesting paddy to help the farmers during the Covid-19 pandemic.

The PM replied that leaders and activists of her party Bangladesh Awami League and its associate bodies did the jobs as their political commitment.

Regarding women’s development, Sheikh Hasina said that the work was not so easy and for this, her government had to face many difficulties.

Mentioning that Father of the Nation Bangabandhu Sheikh Mujibur Rahman laid the foundation of women’s development in this country, she said that her government has implemented various initiatives to ensure the equal rights of women following the footsteps of Bangabandhu.

The presence of women in all fields including sports and employment has been ensured as the obstacles for women’s progress have been removed, she added.

Later, President of International Diabetic Federation Professor Akhtar Hussain also paid a courtesy call on Prime Minister Sheikh Hasina. Hussain handed over an invitation letter to the premier to attend the World Diabetic Federation Congress. The event will be held in Portugal next December where PM Sheikh Hasina will be declared as the first Global Ambassador for Diabetes.

Sheikh Hasina thanked the governing body of World Diabetes Federation for unanimously awarding her this title. She emphasised different steps to control diabetes through changing food habit and creating awareness among the mass people.

The world diabetic federation president informed its activities to the PM.