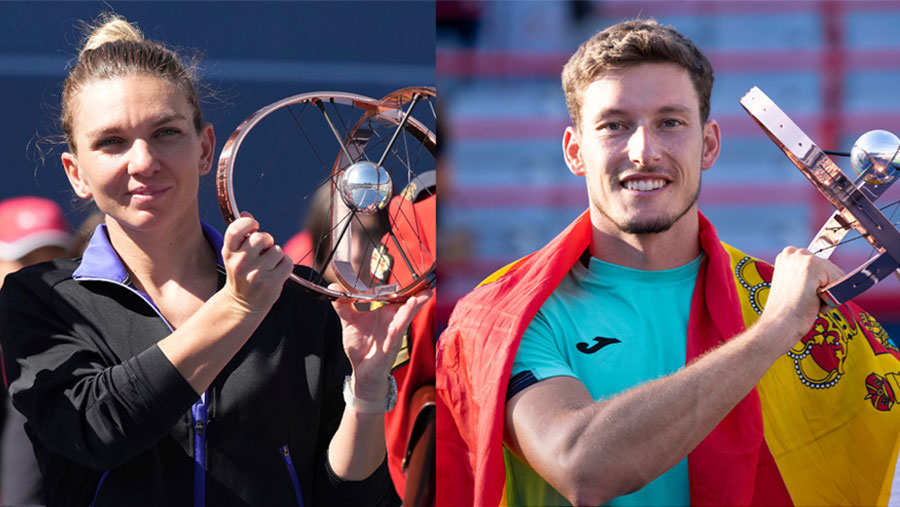 Halep, 30, dropped from second in the world to 20th after missing a large part of last season with injury.

The 31-year-old pulled off what he described as the "best title of his career" after seeing off Britain's Dan Evans in the semi-finals.

Carreno Busta, 23rd in the world, battled back after losing the first set on a single break of serve to turn the tables on world number 10 Hurkacz for a deserved victory.

Haddad Maia would have been dreaming of a similar upset against Halep, but will have to be content with breaking into the world's top 20 after her run to the women's final in Toronto.

Two-time Grand Slam champion Halep showed all her resolve to record a 38th match win of the season – only world number one Iga Swiatek has won more, with 49.

She was broken in the opening game after serving four double faults, but from 3-2 down rattled off four consecutive games to win the opening set.

Haddad Maia went into the final having lost two of her three previous matches against the Romanian, but won their most recent encounter in three sets in the semi-final at Birmingham, on her way to the title.

And the 26-year-old ensured a decider in Toronto after racing into a four-game lead at the start of the second set before holding that advantage to level the match.

Halep has looked vulnerable at times this season, suffering a panic attack on court during a second-round defeat in the French Open, but has also showed some fine form, winning one title in Melbourne in January and also reaching four other semi-finals - most notably at Wimbledon.

She traded breaks at the start of the final set before producing some of her best form of the season to make a decisive second break to lead 3-1 and was able to serve the match out, cementing her place among the favourites for the US Open title later this month.

Pablo Carreno Busta said claiming the biggest title of his career at the Canadian Masters on Sunday has given him a massive boost in confidence and self-belief for the remainder of the season.

The unseeded Spaniard beat Hubert Hurkacz 3-6 6-3 6-3 to win the ATP 1000 event in Montreal, which is part of the U.S. Open Series leading up to the year’s final Grand Slam.

“Not just in the U.S. Open Series, but in the rest of the season it’s very important,” Carreno Busta, who reached the semi-finals of the U.S. Open in 2017 and 2020, told reporters.

“I won 1,000 points. I won a trophy, a very important trophy. My game during all the week was very, very high. I play really, really good from the first match against (Matteo) Berrettini until the last one against Hubie.

“I think I just need to continue this way, believe in myself, being aggressive, and for sure I will have chances to win matches in this season and I hope in the next ones also.”

The 31-year-old said his long wait for a maiden Masters title had not weighed on his shoulders, pointing to compatriot David Ferrer, who had a career-high ranking of third but won just one Masters tournament.

“I know it’s not easy to win these kind of titles,” Carreno Busta said. “Not everyone has a Masters 1000 on his career. For example, Ferrer was world number three and just won one. I know it’s very difficult to win it. It wasn’t extra pressure to have this title. But it’s true that now I have it and I will enjoy it, no?”