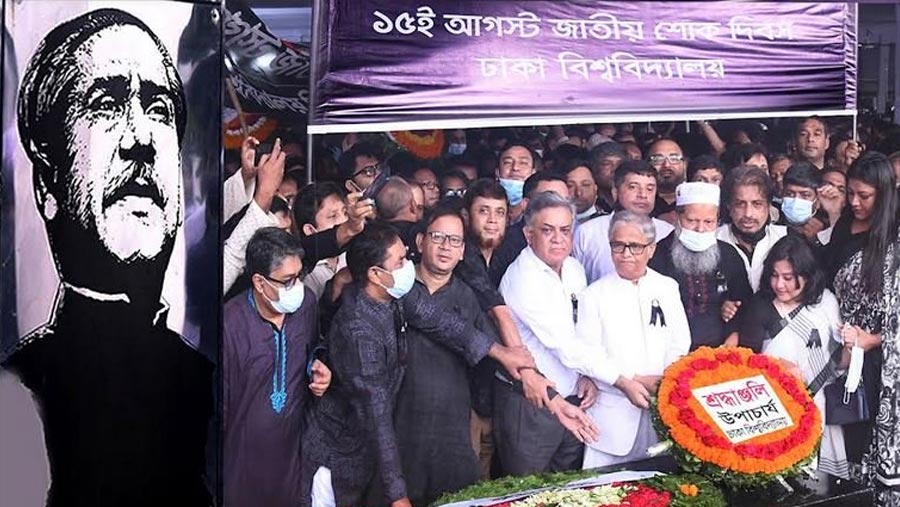 The authorities of Dhaka University on Monday (Aug 15) observed the National Mourning Day and the 47th martyrdom anniversary of Father of the Nation Bangabandhu Sheikh Mujibur Rahman with due solemnity.

The national flag, university and hall flags were hoisted at half-mast atop all main buildings including halls of the university, said a DU press release.

DU teachers, officers and employees led by the VC paid tributes to Bangabandhu in the morning by placing wreaths at his portrait at Bangabandhu Memorial Museum here at Dhanmondi-32.

Later, a discussion on the life and works of Bangabandhu Sheikh Mujibur Rahman was held at the Teacher-Student Centre (TSC) auditorium at 10 am with DU VC in the chair.

While addressing the discussion Dr Md Akhtaruzzaman has urged everyone to work together to build a non-communal and prosperous Bangladesh being imbued with the values and dreams as dreamt by Father of the Nation Bangabandhu Sheikh Mujibur Rahman.

Akhtaruzzaman called upon all to be united under the leadership of Prime Minister Sheikh Hasina for the successful implementation of Bangabandhu's dream and completion of his unfinished works.

Besides, DU Journalists Association (DUJA) organised a photo exhibition featuring 120 rare photographs of Bangabandhu which was inaugurated by VC Dr Akhtaruzzaman in the morning.

DUJA President Mamun Tusher, General Secretary Sirajul Islam Rubel and members of the body were present on the occasion.

The Faculty of Fine Art arranged an art competition at 10 a.m. at TSC cafeteria on the day. Special prayers were also offered at all mosques after Zohr prayers and 'Upasanalaya' on the campus.