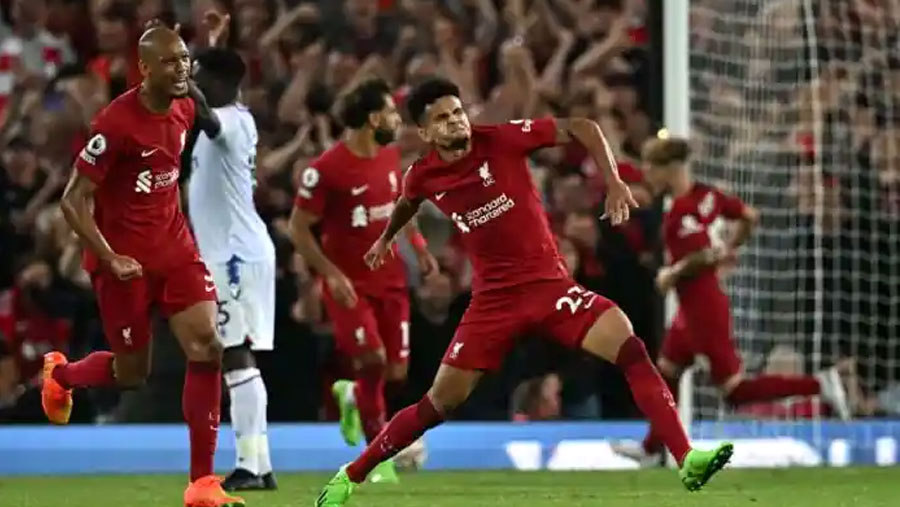 Liverpool needed a stunning equaliser from Luis Diaz to deny a battling Crystal Palace victory at Anfield on Monday (Aug 15) night after Darwin Nunez was sent off for a head-butt. Palace frustrated the Reds with great success and took the lead when Wilfried Zaha raced through to fire in his side's first goal of the season. Nunez had an unsuccessful night in front of goal and made things tougher for Liverpool when he was sent off for head-butting Joachim Andersen. However, just four minutes after that red card Diaz brought the hosts with a brilliant run from the wing and shot from distance.

Luis Diaz rescued a point for Liverpool against Crystal Palace after new summer signing Darwin Nunez was sent off in his first Premier League game at Anfield.

Liverpool dominated possession in the first half but Palace went ahead through Wilfried Zaha's clinical finish from Eberechi Eze's superb pass.

Expensive striker Nunez had been desperate to make an impact in front of the Kop, but was deservedly shown a red card by referee Paul Tierney after 57 minutes when he reacted to a shove from Joachim Andersen with a headbutt that floored the Palace defender.

Liverpool responded in defiant fashion with a brilliant equaliser from Diaz four minutes later, cutting in from the flank before flashing a right-foot finish past Vicente Guaita.

The inevitable siege ensued, with Mo Salah and substitute Fabio Carvalho just off target. But Palace had a golden chance of their own when Zaha struck the far post when he should have scored, as Liverpool remain without a win from their first two games.