Bangladesh lose to India in SAFF U-20 final 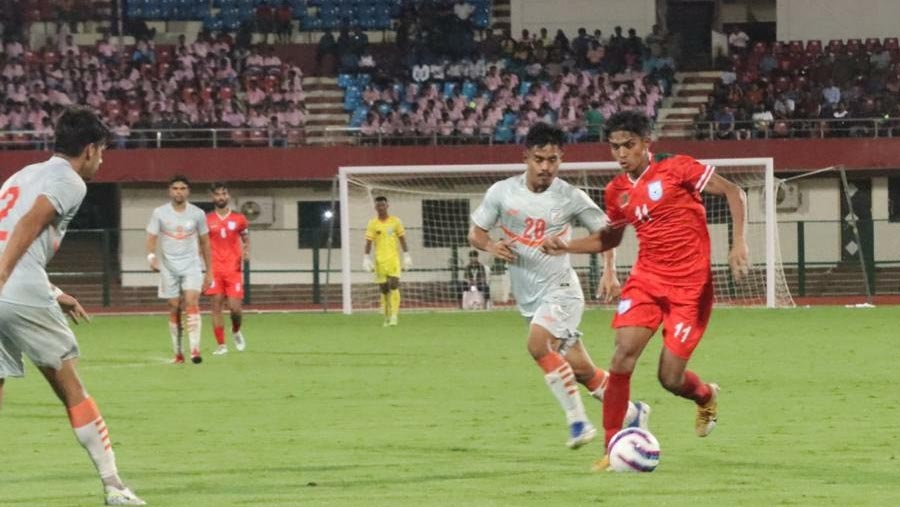 India won the SAFF U-20 Championship for the second consecutive time after beating Bangladesh 5-2 in the final at the Kalinga Stadium in Bhubaneshwar on Friday (Aug 5). Gurkirat Singh stole the show as he scored four goals while Himangshu Jhangra bagged another one. Both the teams were locked at 2-2 at the end of regulation time which forced the match to go into extra time. Jhangra struck first in extra time which took away the winds from the opposition sail. India went on to dominate the rest of the game and Singh netted twice soon after to seal the fate of the match in India's favour. Singh won the golden boot while Som Kumar bagged the best goalkeeper award.

A brilliant hattrick by Gurkirat Singh guided hosts India to clinch the SAFF U-20 Championship title for the 2nd consecutive time beating last edition’s runners-up Bangladesh by 5-2 goals in the final at the Kalinga Stadium of Bhubaneswar, India on Friday (Aug 5).

With the feat, hosts India not only clinched the SAFF U-20 Championship title for the second consecutive time after 2019 but also took sweet revenge for their 1-2 goals defeat against Bangladesh in the league basis match.

The match was locked in 1-1 goals in the first half and was again locked in 2-2 goals in the stipulated 90-minute that forced the final to a 30-minute extra session.

In the day's keenly contested final, Gurkirat made a hattrick scoring four goals in the second, 60th,93rd and 99th minutes while Himanshu Jhangta netted the other goal for India in the 92nd minute.

With the day's feat, Gurkirat emerged as the highest scorer and most valuable player of the meet. Indian custodian Som Kumar was named as the best goalkeeper while the Sri Lanka team was adjudged the most disciplined team.

In the stipulated time of the final, Gurkirat put hosts India ahead in the very second minute of the match from a penalty (1-0).

Rajon Howlader leveled the margin for Bangladesh in the 45th minute by a straight shot from a goalmouth melee, utilising a brilliant pass of right winger Rafiqul Islam (1-1).

Bangladesh took lead from behind in the 48th minute when Shahin Mia found the Indian net with a good shot from a melee  (2-1).

Gurkirat leveled the margin for India in the 60th by a low shot from the danger zone after receiving a ball from mouth melee to lock the match 2-2 in the schedule period.

In the extra session, Himanshu again put India ahead in the 92nd minute while  Gurkirat added two goals within just six minutes guiding India to their second crown.

Bangladesh team, which is yet to win the SAFF U-20 title (previously known as SAFF U-19 and U-18 meet) lost three consecutive finals – first against Nepal in 2017 in Bhutan, second and third against India in 2019 and 2022.

India booked a seat for the final securing nine points from four matches after beating Sri Lanka by 4-0 goals, outplaying Nepal 8-0 and the Maldives 1-0 before conceding 1-2 defeat against Bangladesh in their first match.

Nepal and India are the most successful nations in the meet winning the title twice while Bangladesh finished runners-up for the third consecutive time.