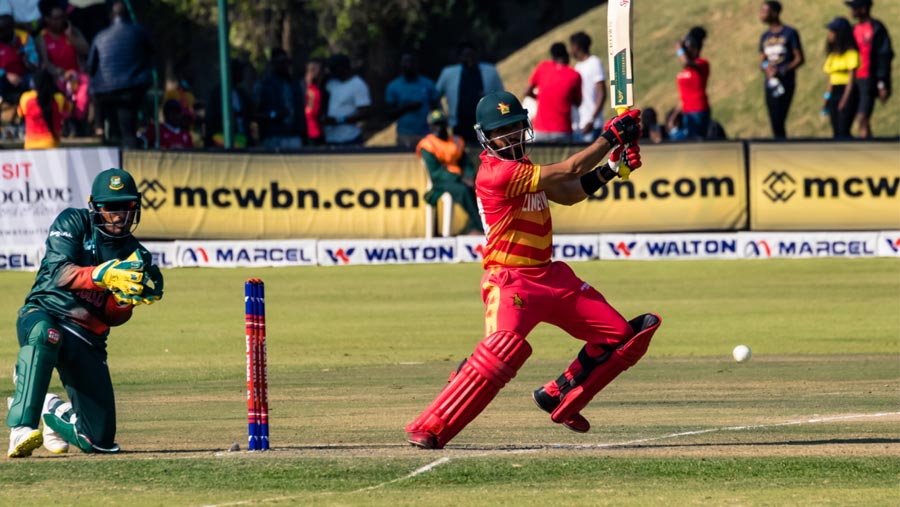 Zimbabwe have beaten Bangladesh in a one-day international for the first time in more than nine years with one of their greatest comebacks.

The Tigers were made to bat first and posted an imposing 2-303 at Harare Sports Club. But Zimbabwe replied with 5-307, reaching the target with 10 balls to spare as they pulled off their equal third highest chase.

Zimbabwe lost their openers in the first two overs and were 3-62, but Innocent Kaia and BBL Draft nominee Sikandar Raza both scored centuries – achieved in the same over – to lead their team to victory in the first of three ODIs.

Even after losing 19 straight ODIs to Bangladesh, victory was no surprise. Zimbabwe won the preceding T20 series 2-1, their first against a full ICC member.

Kaia, playing his fourth ODI, accidentally ran out Wessly Madhevere while trying for a second run, and dropped Zimbabwe to 3-62 in the 14th over.

But he and Raza, in his 115th ODI, set about repairing the damage and counterattacking.

Kaia was dropped on 68 and 74 in the same over, and reached his maiden hundred off 115 balls. Two balls later, Raza got to his fourth hundred from 81 balls, the third fastest for Zimbabwe.

It was only the second time two Zimbabwe batters scored centuries in the same ODI. The last time was in 2004.

The brilliant partnership ended at 4-254 when Kaia tried to slog Mosaddek Hossain and top-edged to short fine leg. His 110 off 122 balls included 11 boundaries and two sixes.

Raza finished off the match by pulling a Mosaddek delivery for a six over midwicket. Raza was 135 not out from 109 balls. He hit eight boundaries and six sixes.

The top four batters scored fifties in one innings for the first time in eight years. But they batted relatively conservatively considering all the wickets in hand. There were only two boundaries in the last three overs.

Captain and opener Tamim Iqbal, the only Bangladesh batter with more than 7000 ODI runs, passed 8000 then was soon out for 62.

Liton Kumar Das retired hurt on 81 off 89 balls when he pulled a hamstring running a single. He's been ruled out for the rest of the series and could be sidelined for a month, putting his Asia Cup prospects in doubt.

But Anamul Haque was caught out in the deep for 73 off 62 and Mushfiqur Rahim finished 52 not out from 49.