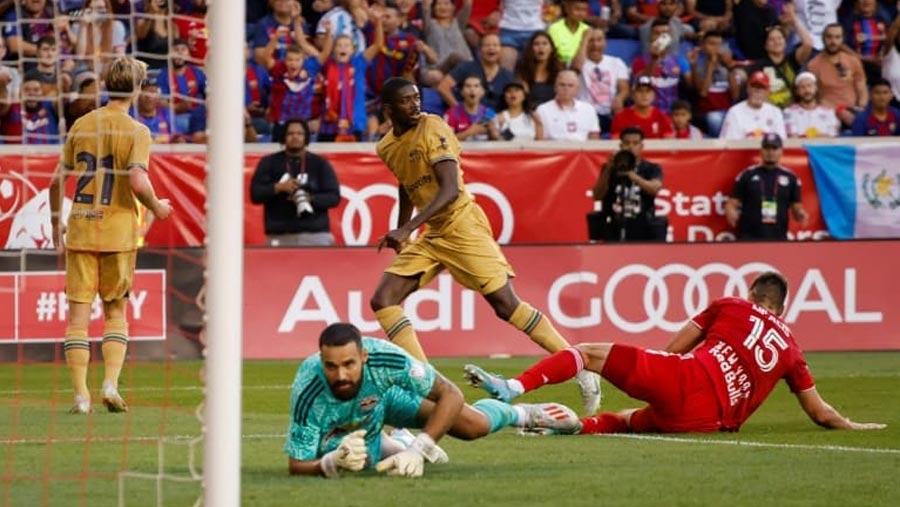 Ousmane Dembele and Memphis Depay lifted FC Barcelona to a 2-0 victory over the New York Red Bulls on Saturday (Jul 30) as the Spanish giants finished their four-match friendly tour of the United States unbeaten.

French winger Dembele fired Barcelona ahead after 40 minutes before a sellout crowd of 25,252 at Red Bull Arena. Depay made it 2-0 in the 87th minute – five minutes after the Red Bulls were reduced to 10 men when Daniel Edelman was sent off for a wild sliding tackle on Pablo Torre.

While newly signed striker Robert Lewandowski remains in search of his first goal for Barcelona, the club heads back to Spain having racked up three wins and a draw in four friendlies, Saturday's victory following a 6-0 win over Inter Miami, a 1-0 triumph over La Liga rivals Real Madrid and a 2-2 draw with Juventus.

Dembele opened the scoring with his third goal in two matches. From a pass by Raphinha he unleashed a right-footed blast into the bottom right corner of Carlos Coronel's net. Depay struck in the 87th, capitalizing on a Red Bulls defensive mixup to slot the ball into an empty net.

Lewandowski, signed from Bayern Munich was formally introduced as a Barca player at the start of the tour in Fort Lauderdale, Florida.

The Polish striker was clearly pushing to open his Barcelona account in the first half, but failed to connect on a spate of attempts. That included a header over the bar in the 17th minute and a 20th-minute attempt in which he escaped a trio of defenders to unleash a shot that was also over the bar.

In the 25th minute, Dembele broke free down the right side to set up Lewandowski, but Coronel easily gathered in his shot. Coronel had to work harder in the 30th to deflect another attempt from Lewandowski.

A lively Red Bulls side had a smattering of chances, notably two headers from Sean Nealis that both went wide. But the hosts, in the midst of an MLS Cup playoff push, changed their entire 11 for the second half.

A handful of halftime changes for Barcelona didn't include Lewandowski, but he didn't have any more luck in the second half as substitute keeper Ryan Meara denied him twice before he departed in the 73rd minute.

Barcelona will conclude their pre-season with a match against Mexico's Pumas UNAM at Camp Nou next Sunday.