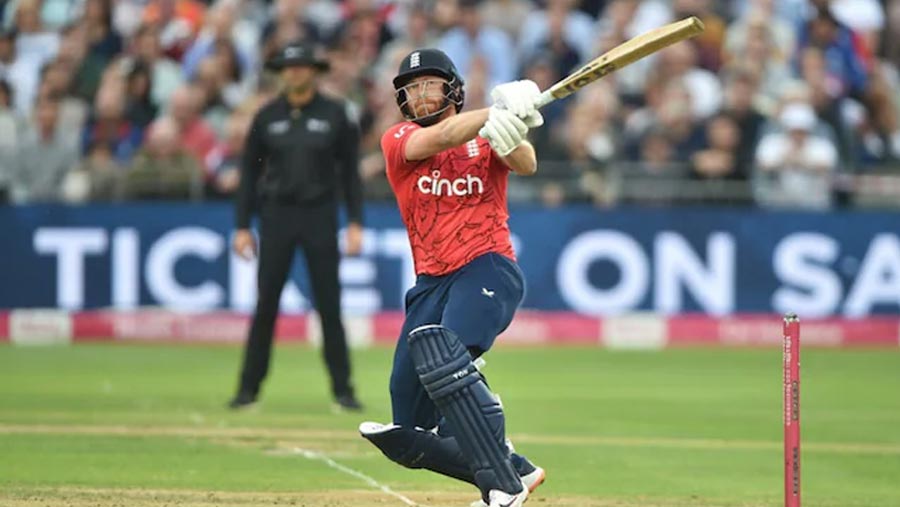 Jonny Bairstow's excellent season continued as he made 90 in England's 41-run win over South Africa in the 1st T20 international at Bristol on Wednesday (Jul 27). Moeen Ali compiled England's quickest T20 fifty, off just 16 balls, in the hosts' 234-6 – their second highest total at this level behind the 241-3 they posted against New Zealand at Napier in 2019.

Continuing his stunning Test form, Bairstow bullied the Proteas bowlers throughout his 53-ball assault as England racked up 234-6 - their second highest T20 score.

Bairstow added 106 with Moeen Ali, who smacked 52 from 18 balls, in a riotous fourth-wicket stand lasting just 37 balls, as one over went for 33 runs.

England hit 20 sixes, the most they have ever hit in a T20 game, while Moeen's 16-ball fifty was the fastest by an England player.

The pair heaped misery on a ragged South Africa side, who dropped Bairstow four times in a fielding performance that bordered on comical.

Despite losing both Quinton de Kock and Rilee Rossouw in the second over, the visitors threatened to pull off what would have been their record chase as 21-year-old Tristan Stubbs smashed an astonishing 72 from 28 balls.

But Chris Jordan bowled a nerveless 18th over and, with 51 needed from the final two, Stubbs was caught at long-off from the bowling of Richard Gleeson.

The Lancashire seamer took two further wickets in the over and South Africa ended on 193-8.

The second T20 of the three-match series takes place on Thursday in Cardiff as both sides build towards the T20 World Cup in the autumn.