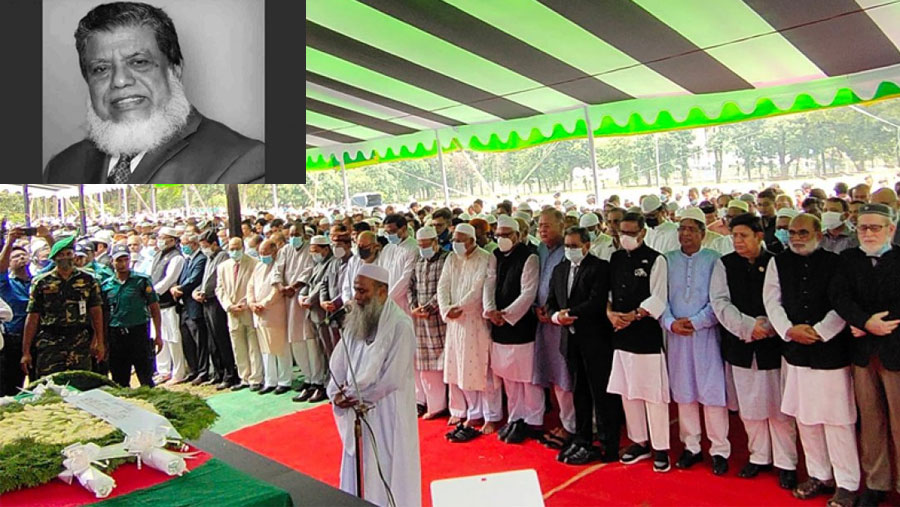 Hafez Roknuzzaman Swapon, nephew of Fazle Rabbi, conducted the Namaz-e-Janaza. Earlier, his body was brought to the school ground from Helenchaarea of Velakopabeel (dried water body) of the upazila and people were allowed to pay their last tributes to him. A mourning meeting was also held before Janaza.

A contingent of police led by district magistrate Oliur Rahman and superintendent of police Tawhidul Islam gave a guard of honour to Fazle Rabbi, also a valiant freedom fighter, paying respect to his role in the 1971 Liberation War. Later, his body was taken to village home at Gatia where his third Namaz-e-Janaza was held. Later, he was buried at his family graveyard around 5 p.m. following a full of state honour.

Fazle Rabbi Mian passed away at Mount Sinai Hospital in New York, the USA at 2 a.m. on Saturday (Bangladesh time) while he was undergoing treatment there.

A plane carrying his body landed at Hazrat Shahjalal International Airport in Dhaka on Monday morning. Then the body was taken to Jatiyo Eidga Maidan adjacent to Bangladesh Supreme Court where he practiced for several years.

On Eidga Maidan, lawmakers, colleagues of the court, Gaibandha people living in Dhaka and well-wishers paid tribute to him by placing wreaths on his coffin.

Later, the body was flown to Velakopabeel, near to Bonarpara of Saghata upazila.