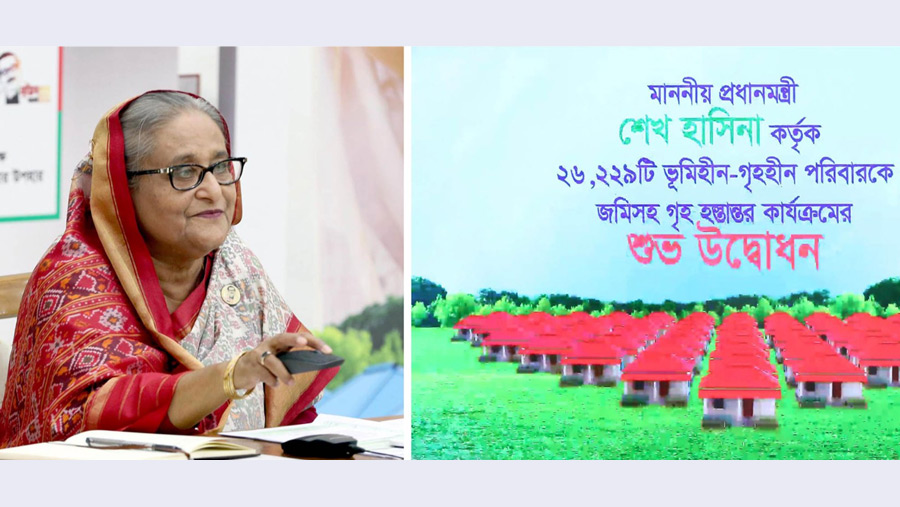 Prime Minister Sheikh Hasina on Thursday (Jul 21) announced Magura and Panchagarh landless-and-homeless free districts, as she distributed 26,229 more houses to homeless families across the country as part of her government's effort to ensure housing for the landless people.

Apart from the nine upazilas of the two districts, the premier simultaneously declared another 43 upazilas of different districts of the country as landless-and-homeless free.

She made the announcement at the houses distribution ceremony at five places in five districts under the third phase of Ashrayan-2 Project, joining virtually from her official residence Ganabhaban, local media reported.

On this auspicious moment, Sheikh Hasina said, "We are very much happy that due to our initiative we've attained a primary success that all upazilas of two districts became fully free from landless and homeless people."

Apart from these, 43 other upazilas of various districts across the country also got the same status, she said.

"This is the big achievement. I hope that like this way, all districts and upazilas of Bangladesh will be free from landless and homeless people," she said.

Mentioning that every people of the country will have a house and an address, she said, "Insha Allah we will be able to do that. I believe it."

Now, a total of 52 upazilas of different districts, including all the nine upazilas of Panchagarh and Magura districts, have no landless and homeless families.